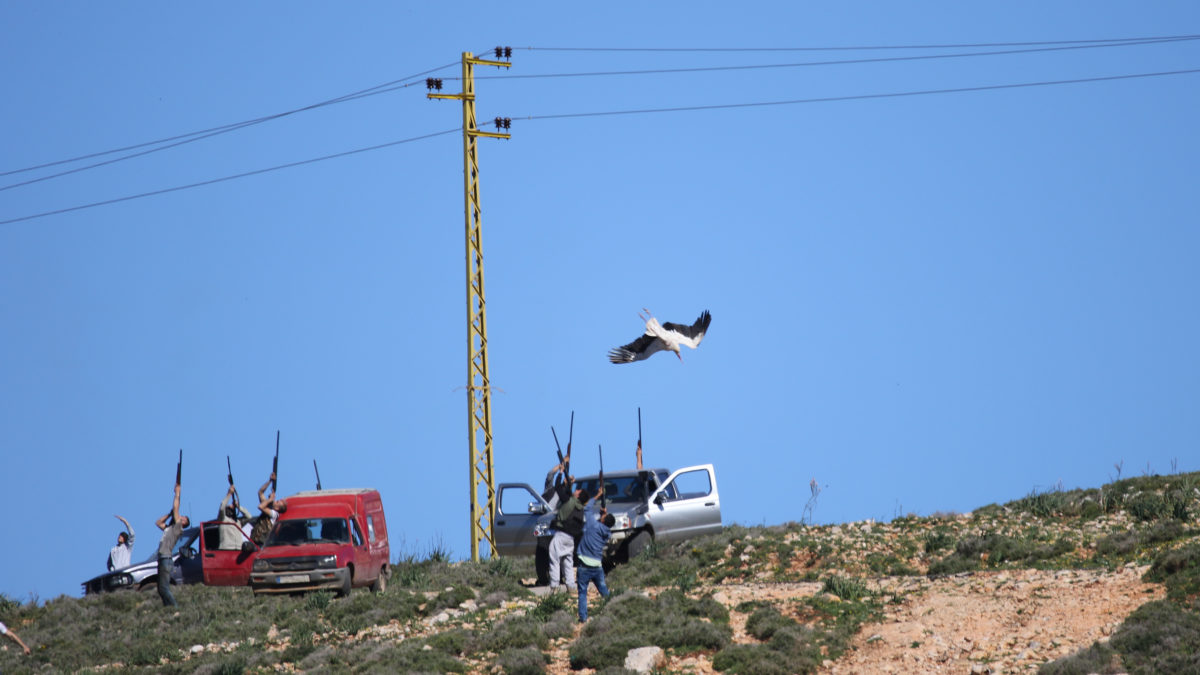 It’s fitting that the White Stork kicked off our Flight for Survival campaign, because this species actually helped scientists to discover the phenomenon of bird migration. It seems hard to believe nowadays, but people once didn’t realise that birds migrated.
Bizarre theories used to abound: that birds hibernated at the bottom of the oceans, or even turned into mice when they disappeared from our landscape. But in 1822, near the German village of Klütz, an incredible phenomenon was found: a stork carrying an arrow in its neck – the kind of arrow only seen in central Africa. This Pfeilstorch or “arrow stork” was the first of several specimens found in Europe with arrows embedded in their bodies, planting the idea that birds migrated long distances between breeding and wintering grounds.

The way in which White Storks migrate is a truly marvellous spectacle. They travel in their thousands, sometimes said to block out the sun, and use their enormous wings to soar along the updrafts, spiralling to altitudes of 1,500 m before gliding effortlessly for kilometres – a technique that comes in particularly useful when crossing the vast Sahara Desert. Because large stretches of water do not create the right air currents, as they travel between Europe and Africa they avoid the Mediterranean Sea, diverting mainly via the Bosporus in the East or the Strait of Gibraltar in the West – funnelling them into “bottlenecks” where many storks travel in close convoy.

On their voyage, they must overcome a series of obstacles. Electrocution on overhead powerlines is an ever-present risk, and many stopover sites they once relied upon have been destroyed by intensive agriculture. And then there are the humans who want to kill them directly.

It’s ironic that the illegal and mass shooting of White storks – which helped us discover migration in the first place – is an ongoing threat to this protected species. The killing of White Storks has moved from low-level subsistence for food, to a large-scale sport enjoyed by hundreds of people using sophisticated technology – just because they can. They’re part of a huge crisis affecting migratory birds worldwide: more than 24 million birds are illegally killed every year in the Mediterranean alone. For those taking the Eastern route, the worst illegal killing “blackspot” is Lake Qaraoun in Lebanon’s Beqaa Valley. At the height of the migration season, hundreds of thousands of White Storks are funnelled through this narrow valley over a few short days, and many thousands never see the other side.

Fortunately, BirdLife Partners in countries all along its route are working hard to protect this species. From the staff of Doğa Derneği (BirdLife in Turkey) who recently discovered a previously unknown migration bottleneck, to the NABU (BirdLife in Germany) conservationists who share live updates on the migration journeys of satellite-tracked White Storks, they recognise their duty to safeguard migratory birds on their way to their next destination.

Our Lebanese Partner Society for the Protection of Nature in Lebanon (SPNL) works tirelessly to end the illegal killing of birds in their country. They have been campaigning for many years to tighten enforcement of the country’s hunting laws, and their anti-poaching unit makes daily visits to illegal killing blackspots during migration season. But they also understand that it’s not just about punishing wrongdoers – it’s also important to change minds. Their community engagement programme is doing just that – and it’s already beginning to have a real impact.

Furthermore, in 2017 Lebanon’s President Michel Aoun spoke out against the illegal killing of birds in a heartfelt address. “It is a shame to turn Lebanon into a wasteland without plants, trees, birds and sea animals,” he said. “There should be a peace treaty between Man and the tree as well as Man and birds, because we continue to transgress upon them”. Hope is on the horizon, but there is still much urgent work to be done before the skies over Lebanon can truly be considered safe for storks.

The White Stork is probably best known for its role in European folklore as the bringer of babies to new parents. But it was seen as a symbol of good luck and fertility long before that. Ancient Greeks and Romans saw the White Stork as a model of perfect parenthood – and this is accurately reflected in the real-life behaviour of the birds, who share parental duties equally. Since the bird likes to nest on rooftops, throughout history the species has been a familiar and iconic part of human life, actively helping humans by hunting pests, and even allowing farmers to time the planting of their crops to the White Stork’s arrival. It would be wonderful to see a world where this species was revered as much as it once was.