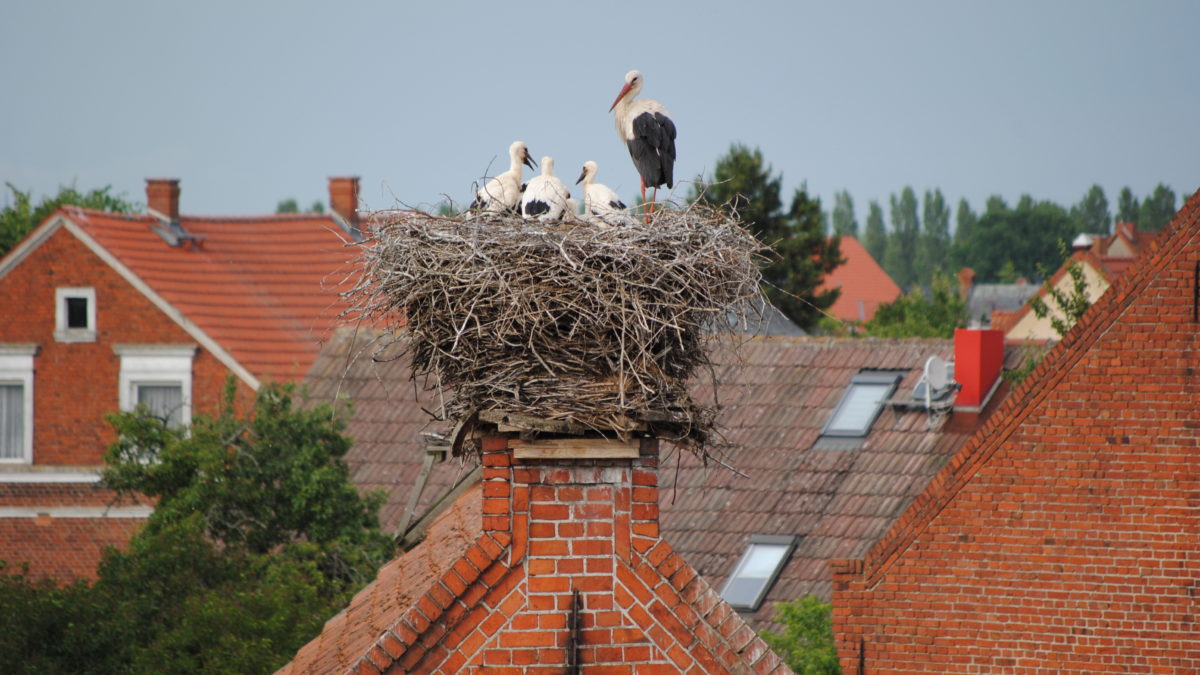 The White stork has taken off! Discover the ‘Stork Villages’ where it spent the summer

Today, our White stork is taking off from Germany, where it has spent an idyllic summer of love finding a mate, building a nest and raising its young. Now that its chicks have fledged, it is ready to set off on its epic migration across Europe and Africa once again. On the journey to its sub-Saharan wintering grounds, it will risk exhaustion, starvation and the threats of shooting and electrocution. Fortunately, the German city of Rühstädt is part of a network of European ‘Stork Villages’ striving to make sure our storks are in the best possible condition to tackle these challenges.

So, what is a Stork Village? Put simply, it’s a place where storks and people live collaboratively side by side. White storks have traditionally nested on rooftops for centuries, often building toppling nests over a metre tall that get added to year by year. In 1994, the international foundation EuroNatur decided to draw on this friendship between birds and people to reverse the rampant habitat loss suffered by storks across Europe. Every now and then, they award a new parish the status of “Stork Village” – a title that qualifies it as an official natural heritage site. Candidates must have resident stork colonies, and put time and energy into safeguarding them and their wetland habitats. This initiative benefits both people and storks, attracting visitors while protecting storks from danger.

There’s one place where storks are not only protected, but celebrated: the district of Cheshinovo-Obleshevo in North Macedonia. In this region, storks and people have always had a close bond. Since much of the farmland is devoted to rice fields, locals have daily contact with the birds simply through working outdoors. This has fostered a relationship of love and respect, as Ksenija Putilin, Project Coordinator of the Macedonian Ecological Society (MES, BirdLife Partner), describes:

“White storks are symbols of luck and happiness. Their arrival is the reminder that work in the field needs to begin Their nesting success is a sign of a good year, and the date they leave is part of religious festivities. People are very reluctant to remove a stork nest from their roof – which may be why this is one of the last colonies of storks in North Macedonia which nest predominantly on houses.”

Today, they not only celebrate the birds, but also ensure their safety. Locals now report birds that are nesting on unsafe electricity poles and conduct yearly population counts. Their annual “Stork Day” celebration draws crowds, and theirs are the only schools in the country to provide regular education on migratory birds and their habitats. They have even updated their coat of arms to feature their beloved storks. But how did this remote rural area go from a small, sleepy community to the stork capital of North Macedonia?

In Cheshinovo-Obleshevo, none of it could have happened without the dedication of one local ambassador, Violeta Janeva. As a local government employee, she has worked with MES tirelessly for six years to put the area on the map as a shining example of nature and people existing in harmony. One of the biggest improvements she has made is to work with local energy companies to re-model dangerous powerlines that risk electrocuting birds.

“Energy companies have always known about their responsibility towards storks. Nowadays, they are held accountable more fervently. Janeva encourages locals to report problems with electrical installations which may harm storks and demand that actions are taken,” says Ksenija Putilin.

Janeva has also been a key point of contact for helping MES to get storks into the school curriculum. Today, children can enjoy presentations by biologists, activities out in the field, and a host of stork-related drawing, poetry and photography competitions. Every summer, children get to showcase their songs, plays and dances at the annual Stork Day, a jubilant celebration of local culture and cuisine.

But it’s not all fun and games. Janeva has also persevered through great adversity. During a turbulent political period in North Macedonia where a change in government had all but stopped state activities, she still managed to continue the project and even organise new collaborations. So what keeps her so motivated, even when she’s not getting support from higher up?

“It’s a really special feeling knowing that you do not stand with your arms crossed while nature’s warning signs are all around us,” she says. “I grew up with a stork on the roof of my house, hoping every spring that it would be in flight when I saw it for the first time – which, traditionally, would bring me luck for the whole year.”

“Cheshinovo-Obleshevo supports the densest population of storks in North Macedonia, where they have the highest breeding success in the country. The strong connection between storks and people is what makes my district special. In a world that faces biodiversity loss and birds struggling to survive, we need to protect what we already have.”

Today, the future looks bright: The initiative of the European Stork Villages has truly put Cheshinovo-Obleshevo on the map. The locals are now known across the country as stork caretakers, and other villages are now asking to take part. MES are currently developing a project to welcome these new candidates into the Stork Village network.

And there’s even more in the pipeline: Janeva has just secured three years of funding to set up sustainable ecotourism in the area, which will boost incomes and livelihoods in a way that doesn’t destroy the storks’ beautiful habitat. Fancy a visit? We know we do.