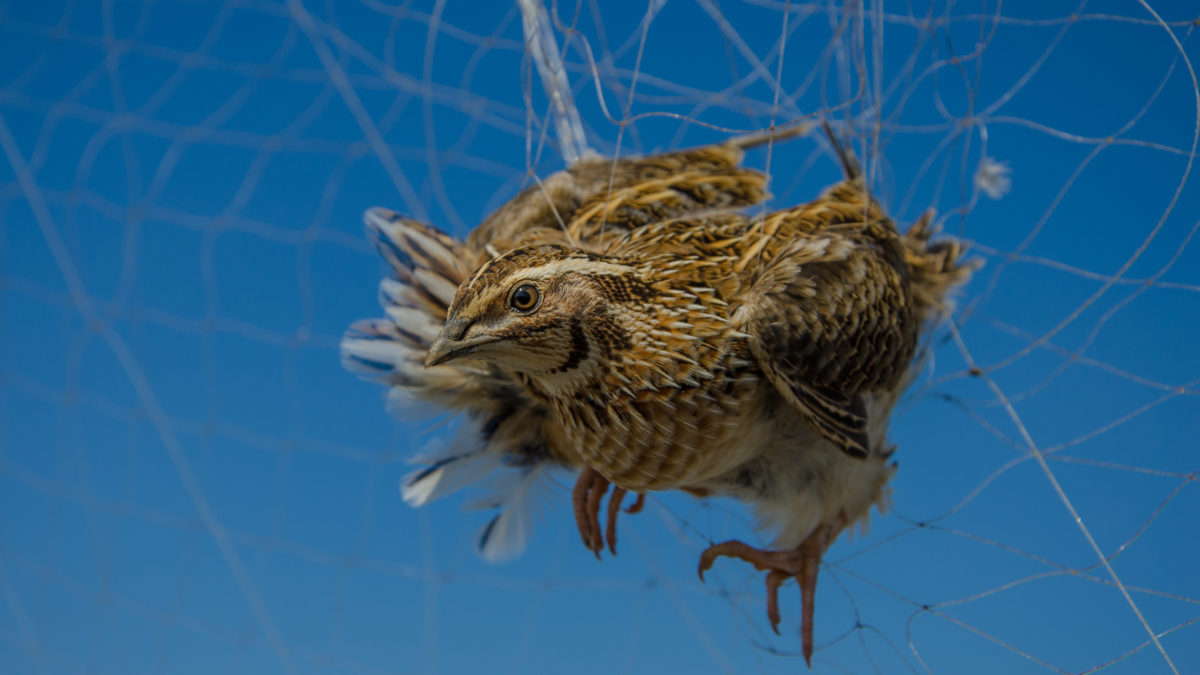 Despite its attempts to live a secretive life, the migration route of the endearingly rotund Common quail leaves it subject to illegal trapping. Action is needed – with your help we can halt their decline and protect many other bird species at the same time.

The small, seemingly shy Common quail Coturnix coturnix prefers to stay hidden amongst the rough grasses of farmland as it forages with its long, sharp claws for insects and seeds. Birdwatchers have much better chances of hearing their characteristic call than seeing them. Though a frustration to birdwatchers, their secretive behaviour is for their own good, since unfortunately when they do encounter humans it is often at their peril.
With streaked and barred brown feathers and a prominent white eye-stripe, they are distinctive in appearance, but their small and stocky build gives no allusion to the impressive flying feats this species is capable of. These birds habitually avoid flying: if disturbed, they prefer to either run away or ‘freeze’, hoping to go unnoticed. However, this changes in a spectacular fashion when, using their disproportionately long and powerful wings, they take to the skies to migrate between their breeding grounds in northern Europe and wintering grounds in the Sahel belt of sub-Saharan Africa. This makes them the only species of their order (which includes pheasants, partridges and grouse to name a few) which migrate.

Interestingly, not all Common quails migrate – the tendency to do so is determined genetically. Within a population, some individuals will perform long migrations, some may only migrate to the southern Mediterranean, and others, referred to as sedentary birds, will not migrate at all. The proportion of quails that migrate is actually declining and there are two suggestions as to why. Firstly, conditions in wintering grounds have become poor because of recurring droughts since the 1970s, making individuals that migrate only a short distance or not at all, more likely to survive. The second theory is that by introducing non-migratory Japanese quail Coturnix japonica into populations to replenish game stock, the gene pool is being flooded with sedentary genes.

Yet, for those that do migrate, the characteristic which makes them so impressive is also their downfall. While making the trip, their attempt to live a life free from human interaction is compromised as they are highly vulnerable to trapping and shooting. The efforts of those that take the Eastern route are all too often wasted after completing their epic flight across the Mediterranean. Having journeyed across the sea they fly low, heading for a place to rest but instead find themselves caught up in vast nets, particularly in Egypt.

The illegal killing of Common quail can provoke a lot of debate. With very large population numbers and an IUCN Red List rating of Least Concern, they are not considered to be at risk of being hunted to extinction. Historically, they have been an important food source to Egyptians and the consumption of their meat, though limited by quotas, is legal. However, with advances in hunting methods over the last century, the odds have become increasingly stacked against them. The placement of electronic devices under nets which play recordings of quail song lures greater numbers towards the traps. Additionally, lack of policing means that regulations on net size, spacing and time of year are ignored – including hunting during spring, which is illegal. This, along with the poor enforcement of catch restrictions, means quail trapping is now taking place on an unsustainable, commercial scale.

On top of this, it’s not just the quails that get caught in the nets. These nets are indiscriminate, meaning the demand for quails is putting other birds (including protected or Endangered species) in at risk. The trapped quails often entice predatory birds such as Merlin falcons Falco columbarius, Eurasian sparrowhawks Accipiter nisus and Common kestrels Falco tinnunculus towards what looks like an easy meal. They then become ensnared and meet the same fate as their prey.

Our partner, Nature Conservation Egypt (NCE), strives constantly to protect the nation’s bird species. They have been working with the government to simplify the nation’s often complex anti-poaching laws, and to get them properly enforced on the ground – with particular emphasis on preventing the use of electronic calling devices.

Moreover, NCE is taking advantage of the power of education and sustainable ecotourism to safeguard birds. Tourism is a principal source of income for Egypt – NCE is working with the industry to ensure its practices are not environmentally damaging, as well as involving tourists and locals in activities with an ecological emphasis. By introducing communities to birdwatching, for example, they demonstrate how such activities can generate an income and boost the local economy without harming the birds. More importantly, the locals can develop an appreciation and interest in Egypt’s birdlife that goes far beyond their trapping and consumption.

An Egyptian hunter brings home a couple of freshly caught quail for dinner. It’s how he feeds his family, a tradition passed through countless generations, and probably sustainable for many more. But consider nets spanning hundreds of kilometres, trapping tens of millions of birds each year – this is no longer mere subsistence, but an industrial-scale problem. Let’s not allow this to become the third and final reason for Common quail to cease migrating, and do what we can to ensure it can continue to make this special journey safely.

Help the Common quail and other migratory birds by supporting our Flight for Survival campaign, which follows the journeys of seven flagship species and highlights the work of our Partners in combatting illegal killing along their route.