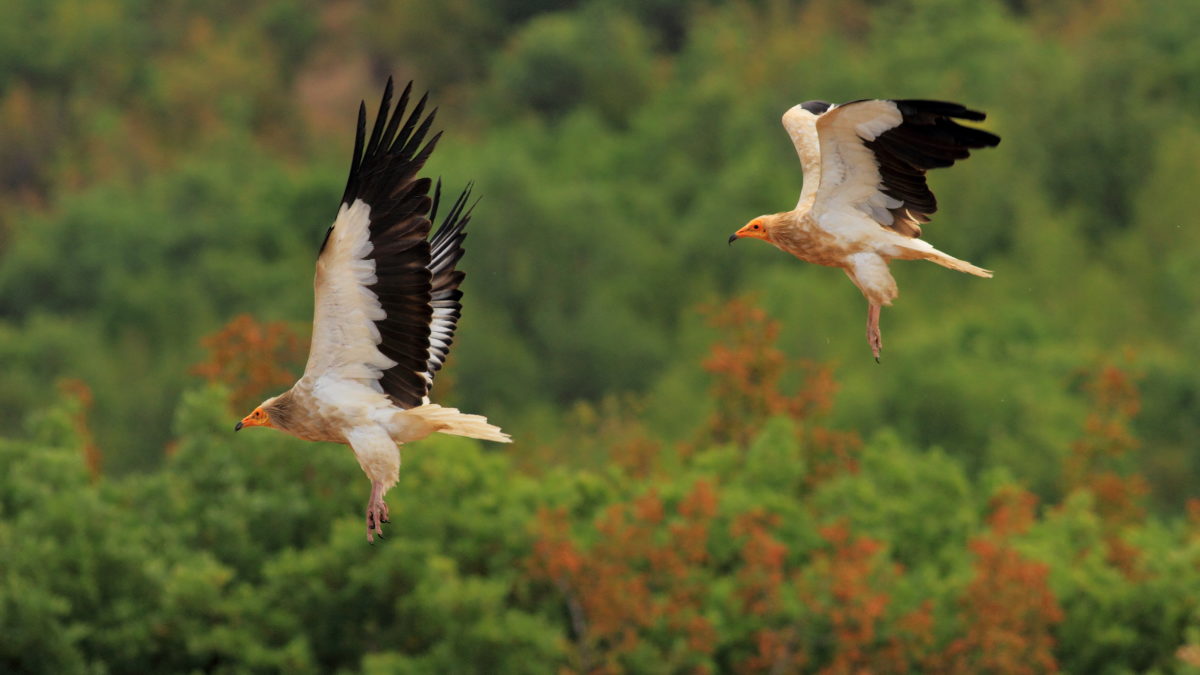 Hailed for its intelligence and majesty, the Egyptian vulture was admired and worshipped throughout history. But decimated by poisoning, electrocution and illegal trophy hunting, the bird that was once an Ancient Egyptian hieroglyph is now Endangered. Can we save it before it’s too late?

In September, Egyptian vultures, both juveniles and adults, will leave their nesting territories in the north and start on their long and dangerous journey back to their wintering grounds in Africa. Migrating mostly in small groups, usually above land, they will avoid the open sea. For example, they will fly over Turkey, then follow the eastern coast of the Mediterranean Sea and enter Africa. They concentrate in great numbers at places with plentiful food supply such as landfills and supplementary feeding sites along the migration route.

This long autumn migration of the Egyptian vultures finishes in Africa. The birds spend the unfavourable winter months there, preparing for the long return journey back in spring. Gathering in great numbers in their wintering grounds, one of the most famous such congregations is in Sahel, south of the Sahara Desert. Here the Egyptian vultures are quite undisturbed by humans and can often be seen feeding within villages and towns. They spend the night in groups on cliffs and electric poles and can be seen at places with plentiful food supply such as landfills and slaughterhouses.

The Balkan Peninsula population spends the winter in Chad, Ethiopia, Sudan, Niger and Nigeria. Juvenile vultures spend their first year in Africa near the rich food resources and come back to their birthplace at 2 – 3 years of age. Together with the long distances spent in migration, Egyptian vultures spend about half of their life away from their breeding grounds.

Notwithstanding their migration challenges, faced with a problem as tough as an ostrich egg, lesser scavengers may quail. Not the Egyptian vulture. One of evolution’s great problem-solvers, this ingenious raptor will set off in search of a suitably sharp pebble. Once it has found one of the right dimensions, it will swing its neck down and fling it upon the egg. If it doesn’t work the first time, it will try again. It almost always gets its dinner.

It’s not just pebbles. The Egyptian vulture also uses twigs to roll up wisps of wool and take them back to line its nest. Such behaviour was first recorded by astonished Victorian naturalists visiting the African continent – but the people of Africa had known it was special for a long time. In ancient Egypt, the species was sacred to the goddess Isis and hailed as a symbol of royalty, protected by law. It was so iconic and widespread that it was nicknamed the “Pharaoh’s Chicken” and even used as a hieroglyph.

If only modern humanity had the same respect for this species. Today, it is facing challenges even the great problem-solver of the bird world can’t overcome. On its 5000-kilometre migration between European breeding grounds and sub-Saharan wintering grounds, it risks being poisoned by lethal farming chemicals, electrocuted by power lines, or shot down by poachers and stuffed as macabre trophies.

The devastation has been wholesale. The European population has plummeted by 50% in the past 40 years, and worldwide, only one in seven juveniles reaches adulthood. For a long-lived species whose lifespan can stretch to 30 years, every bird killed has a profound impact on future numbers.

Direct persecution is a particular problem in the Balkans. Birds that escape poisoning or electrocution may instead be shot down and sold as trophies for taxidermy on the black market. The population has plummeted by more than 80% in the past 30 years, and now only 70 pairs remain. But a more unusual threat is also at play. Eggs and chicks can be stolen straight from the nest and sold to egg collectors, or raised in captivity to be kept in zoos or private aviaries.

In response, our Partner the Bulgarian Society for the Protection of Birds (BSPB) are doing everything in their power to safeguard the Egyptian vultures that pass through their country. They have set up nest-guarding schemes to protect breeding grounds from human disturbance. They have satellite-tagged Egyptian vultures to track their movements and better understand where and how to protect them. Their partner, the Green Balkans, run a much-needed captive-release program to bolster wild populations, aided by breeding centres across Europe.

BSPB are also leading something that, like the vulture, goes beyond national borders. With the help of 13 other countries along the vulture’s migration route, together with BirdLife and other Partners*, BSPB is spearheading an ambitious project, “Egyptian Vulture – new LIFE”. One of the main aims of this initiative is to set up a string of “vulture safe zones”. These are areas cleared of poisoning hazards and supplied with suitable, safe food.

Poisoning is a serious threat to vultures worldwide, and comes from multiple sources. Farmers may leave out poisoned bait to eliminate livestock predators such as hyenas and wolves, with vultures becoming the unintended victims. Less directly but no less devastatingly, many vultures are killed by the veterinary drug diclofenac, which is used as a painkiller on farm animals, but is deadly to the vultures that scavenge upon deceased livestock. Although Diclofenac has been outlawed across Asia, it has, in a shocking step backwards, recently been approved for veterinary use in Europe. BSPB is part of the campaign to reverse this decision.

Egyptian vultures put a huge amount of effort into breeding and raising their young. Couples perform magnificent aerial courtship displays and work together to care for their brood. After all this effort, having their young stolen from the nest or poisoned before they have the chance to breed themselves is unthinkable. It’s true that Egyptian vultures occasionally feed on ostrich eggs, but only ones that are infertile or have been abandoned by their parents – they certainly don’t deserve a fate like this. We will not accept a one-in-seven survival rate – we won’t rest until all juveniles have the chance to live a long and natural life.

Help the Egyptian vulture and other migratory birds by supporting our Flight for Survival campaign, which follows the journeys of seven flagship species and highlights the work of our Partners in combatting illegal killing “blackspots”