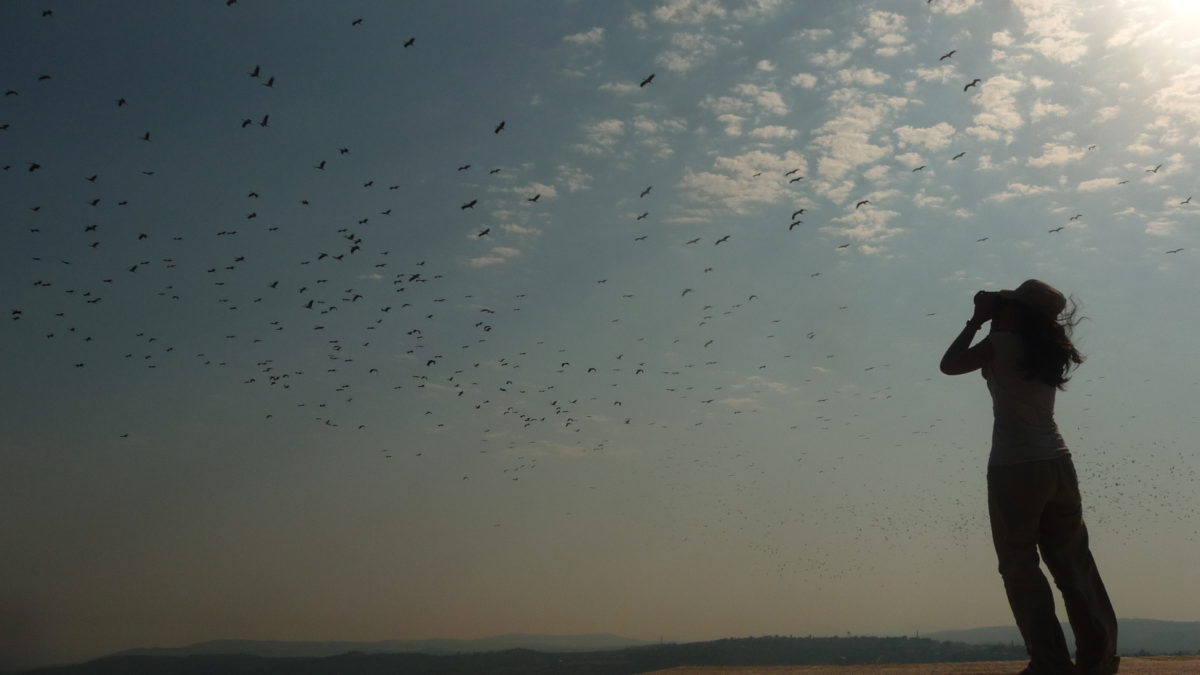 A new study shows that threatened migratory vultures face a variety of threats along their 5000 km journey from Europe to Africa. They risk getting shot, poisoned and electrocuted in 13 countries across 3 continents. Large-scale collaboration is necessary to reduce threats in each country along the flyway to protect these birds.

Anybody who has ever witnessed a huge flock of birds migrating across the sky will be enthralled by the spectacle. Each year, billions of birds migrate between seasonal breeding and wintering areas, some in large flocks, some all by themselves under the cover of darkness. The arrival of many migratory birds in northern breeding grounds typically marks the advent of spring or summer, and migratory birds are therefore deeply embedded in many cultures and folklore tales. Yet, despite their popularity, many of these species are actually in desperate trouble. One species is particularly at risk: the Egyptian Vulture (Neophron percnopterus).

Because Egyptian Vultures have declined dramatically in eastern Europe over the past decades, a BirdLife International alliance led by the Bulgarian Partner organisation BSPB has investigated the threats facing them and other large soaring migratory birds in 13 countries across 3 continents. In a new paper published in the journal Biological Conservation, the team now presents the priority threats in each country along the flyway.

One of the most widespread threats that occurs in almost every country along the flyway is the consumption of poison-baits: typically, some rural livestock herders who may have lost livestock to a wolf, hyena, feral dog or another predator will add some lethal pesticide to a carcass to kill the predator that threatens their livestock. Vultures – uniquely skilled to find dead bodies as their main food source – consume the poisoned carcass and inadvertently suffer a gruesome death. This threat is the biggest problem for vultures worldwide, and for Egyptian Vultures on the Balkan Peninsula, in Saudi-Arabia, and in Ethiopia.

An equally widespread and unintentional threat is power infrastructure. Poorly designed poles that allow birds to simultaneously touch a live wire and a conducting part of the pole lead to instant death from electrocution; other lines or wind turbines can be difficult to see, and large birds collide with them and get killed. The electrocution and collision threat is particularly widespread in Ethiopia, Turkey, Saudi-Arabia and Egypt.

Besides getting killed by poison or by infrastructure, Egyptian Vultures also get shot. This threat is greatest in Nigeria and neighbouring countries, such as Niger, where there is a large market demand for vulture parts, and in some countries in the Middle East that have a ‘tradition’ of hunting migratory birds. The threat of illegal killing affects millions of migratory birds every year, and although Egyptian Vultures are only rarely targeted, being shot still adds to the many other threats that these birds have to negotiate along their flyway.

Some of the threats could be easily fixed, others are more complex, but solutions exist, nonetheless. Poorly designed power infrastructure can be retrofitted to be safer for birds, or governments and international funding agencies could simply invest in safer designs in the first place. Direct persecution and the use of poison baits are already illegal in many countries, but these laws are often not enforced. Many alternative methods exist to reduce the conflicts between livestock owners and wildlife, and governments must invest in protection and compensation schemes that reduce the incentive to use poison baits. Such approaches will take time, so for now the team has started to use dogs to detect and remove poisoned carcasses from vulture breeding areas in the Balkans.

Steffen Oppel, RSPB Conservation Scientist, said: “The greatest difficulty in saving migratory species is to understand where conservation efforts make the greatest difference: is it more effective to safeguard birds on breeding grounds, or in winter? For Egyptian Vultures – and probably many other species – we clearly need to work across a very large spatial scale.”

The direct persecution is a similarly widespread problem that will take years of community engagement to achieve results. In Nigeria, work has started to collaborate with traditional medical practitioners to promote sustainable alternatives to vulture products in belief-based uses. In Lebanon, increased efforts to monitor and enforce existing hunting laws, and collaboration with responsible hunting groups, are starting to reduce the risk of being shot for birds passing over Lebanon during migration. The EU-funded LIFE project “Urgent Actions to Strengthen the Balkan Population of the Egyptian Vulture and Secure Its Flyway” is an excellent example to fund various activities in many countries along the flyway to reduce the threats to migratory birds.

The example of the Egyptian Vulture shows how difficult it is to save bird species that migrate thousands of kilometres across continents. Focusing on a single place will not be sufficient to save the population from declining. The population is declining by a thousand little cuts spread across three continents. Unless concerted action is taken along the entire flyway to reduce threats and prevent people from killing Egyptian Vultures, the population in the Balkans will likely decline further.

You know what’s great? What’s good for Egyptian Vultures is also good for other birds. The migration routes across the Middle East are used by millions of migratory birds, and wintering areas in Saudi Arabia and Ethiopia are frequented by other globally threatened species. The solutions to reduce the various threats exist – but our leaders need to take action. Although, as the saying goes, ‘a single swallow does not make a summer’, imagine how deprived the summer would be without a single swallow.